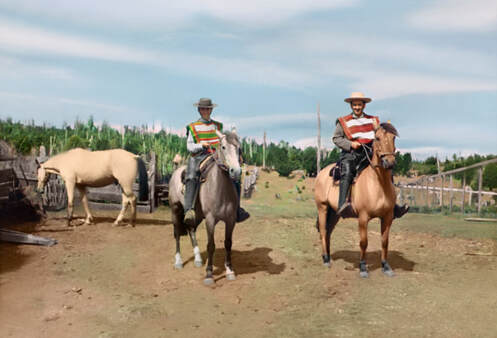 
​
Reviews for  ONE FOR THE ROAD
THE MAGAZINE OF THE NATIONAL PEACE CORPS ASSOCIATION
WORLDVIEW
Winter 2012-13     worldviewmagazine.com     Vol. 25, No. 4
Winter was a rude change from the warmth and bright blues and greens of summer. It rained constantly. It was gray. Nothing dried out. The crudely tanned sheep pelts that served as his mattress began to sweat and smell.  His clothes were cold and damp when he put them on in the morning. He could see his breath as he dressed. The house never warmed up completely, and he and Ramon huddled in the kitchen around the cookstove and brazier. Strong drafts that came through the walls and windows made the candlelight flicker. Even the flame inside the glass chimney of the kerosene lamp was unsteady, and his eyes soon tired when he tried to study. But the weather was a common denominator— it gave everyone something to complain about. It was a season to suffer through, and the animals didn’t like it any more than they did. Sometimes when he went out in the driving rain to help Ramon bring in the sheep, he would pass Salton and Lobo huddled under a clump of quila, with their rear ends
pointing windward. They looked comatose. He wondered if they thought about anything—like sunny days and long green grass. Oddly, colds or the flu were not commonplace at this time of year. Maybe it was because everyone was so isolated. But when misfortune struck, it struck hard.
One afternoon, he and Ramon were drinking mate after a late lunch. It had been raining steadily for forty-eight hours and had only just let up. There was a knock on the door. Ramon got up and opened it. A young boy of about twelve or so stood there, drenched. Ramon ushered him inside. Before the boy could say anything, Ramon had him take off his wet hat and manta and sidle up to the kitchen stove. Tomás brought a stool over so the boy could sit down as Ramon slid the kettle over the firebox.  Once the boy had a cup of hot tea in his hands, Ramon asked the purpose of his visit.
The boy was the grandson of a widow who lived a mile up the road. Last night the old trabajador who had worked for the widow for years had a stroke in the little shed where he slept. He could not move and they could do little for him. The widow had her grandso walk down to the highway very early in the morning—which must have been during some of the heaviest rain—and wait until a trucker came to pick up firewood. The truckers usually made at least one morning trip regardless of the weather. When one arrived, the boy explained the situation and the trucker agreed to return in the afternoon and take the old man to the hospital. The boy was here to ask for Ramon’s help to hitch up their oxcart and to load the man onto it.
Ramon said of course he would help and they would leave as soon the boy finished his tea. Tomás asked if he should come. Ramon hesitated, then nodded. When all three were bundled up, they set off and walked up to the widow’s house. Tomás helped Ramon bring in the oxen and watched him hitch them up to the cart. He made it look so easy—there was not a wasted move. They folded up a manta de Castilla and placed it on the bed of the cart as a mattress. Then they went to the worker’s shed.
Opening the rickety door, it took a second or two for Tomás’s eyes to adjust to the dim light. Over in a corner was a bed of straw. On top was an old man covered by a manta. His complexion was gray and only his eyes moved. He watched them come over and bend down to pick him up. He looked from one of them to the other, but when he saw Tomás, his eyes froze. He did not take his eyes off Tomás as they carried him over to the cart. They covered him with every other manta the widow owned and put a sheet of plastic on top, tucking the edges underneath. They tried to make him as comfortable as possible, although Tomás didn’t know if that made any difference because it looked like the man couldn’t feel a thing. He only stared. And he looked awful. Tomás and Ramon walked down with the boy as far as Ramon’s gate, and said goodbye and good luck. The boy thanked them. They watched the boy slowly lead the oxen down the road. It started to rain again. The next day they learned that the old man did not make it to the hospital. He died in the cab of the truck.
________________________________________________________________________
David Mather (Chile 1968-70) has lived off-grid in Lyme, N.H., for over forty
years. Self-educated in forestry, he founded a successful specialty lumber business that
sold rare domestic woods nationwide. He has traveled extensively, especially
throughout Latin America, and returned twice to Chile to do research for his book.
He and his wife now split their time between Lyme and a small fishing village
on Florida’s gulf coast. One For The Road is his first novel.

Gung-ho and Ready to Save the World / Imagine signing up to spend two years in an isolated farming community in Chile, immersed in an unfamiliar culture, thousands of miles away from home.  This is the situation in which Tom Young finds himself at the beginning of One For The Road - and the situation in which author David Mather '64 found himself in 1968.  Mr. Mather spent 1968 to 1970 in Chile as the Peace Corps' most isolated volunteer, an experience that greatly influenced his life and is the basis for his novel One For The Road.
Published to mark the 50th anniversary of the founding of the Peace Corps, One For The Road  is a fictionalized account of a young Peace Corps volunteer living in Cufeo, Chile, and supervising a reforestation project to help save the community.  Tom Young, or Tomás as he is called by the campesinos, arrives in Cufeo with a grade of "one-minus" in speaking Spanish, unsure of what to expect out of the small community, but eager to do good.  "War or no war, he had wanted to join ever since Kennedy and Shriver had gotten things going.  What a concept - get paid to travel abroad, live in some exotic place, learn another language, help those not as fortunate, and boost America's reputation for a change.  He was gung-ho and ready to save the world."
Tomás's enthusiasm wavers when he arrives in Cufeo and is forced to confront a language and cultural barrier that leaves him isolated and depressed.  As he learns the ways of the community, settles into his job, and adjusts to "how things are done" in Chile, he develops strong ties to Cufeo, aided by his growing relationship with a Chilean woman in the community.
The level of cultural detail in One For The Road draws readers into the Cufeo community.  Mr. Mather's own experience living and working in Chile allowed him to create a strong foundation for a narrative that is at times sad, at times heartwarming, but above all, authentic.


​
Visuals and excerpts from ONE FOR THE ROAD 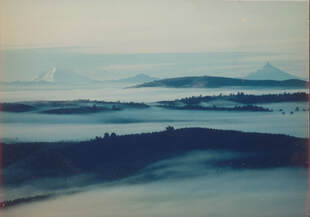 ​This morning was one of those beautiful, fanciful vistas where thick billowy fog had settled into the valleys between the steep, dark hills.The volcanoes Choschuenco and Puntiagudo loomed faintly on the horizon.  Snow had fallen there, brushing them with white that was just a shade off from the pale sky.  It gave the volcanoes a spectral air. 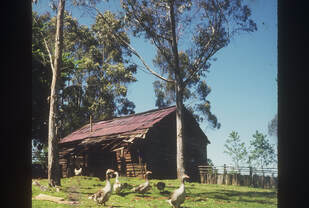 ​The small cape had a patchwork roof of rusty tin sheets that overlapped like a puzzle without a pattern.  Jutting through the roof was a skinny stovepipe with white smoke shooting straight up. 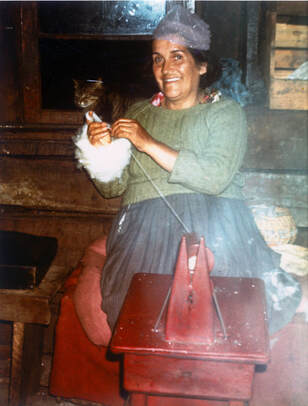 ​The Señora sat in a straight-backedchair, working a spinning wheel set in front of her.  With her thumbs and index fingers she pinched and picked and pulled at the bunch of wool in her lap to feed the simple machine, while pumping the pedal beneath it. 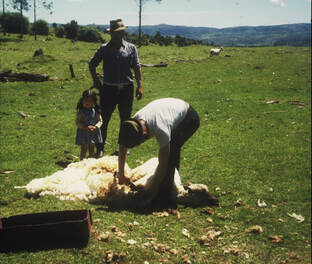 ​
​The weather was turning warmer each day, and Emilio and Jaime began to shear the sheep.  They worked side by side with hand clippers, peeling away whole fleeces. 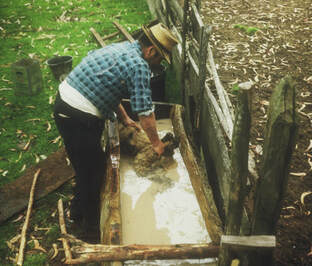 ​
​A few days later the sheep were dipped.  Emilio and Jaime filled a large hand-hewn log trough with many buckets of water, mixing in a chemical solution for parasites that turned the clear water milky. 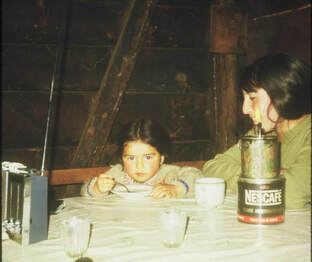 ​
​Almost nothing was thrown away.  If a bottle were non-deposit, then it became a container for something like cooking oil or vinegar or maybe a candle holder.  Nescafe cans were transformed into kerosene lamps. 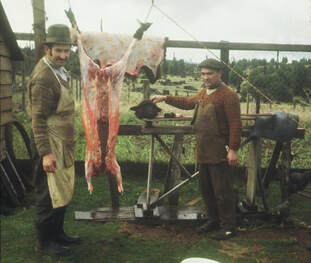 ​They stood on either side of the now headless, gutted, and skinned carcass.  The taller Pablo was unshaven with long dark sideburns and a derby-like hat.  His long apron was spattered with blood and guts, and his black rubber boots had little pieces of meat and fat stuck to them.  Ramon was wearing a beret and a short leather work apron. 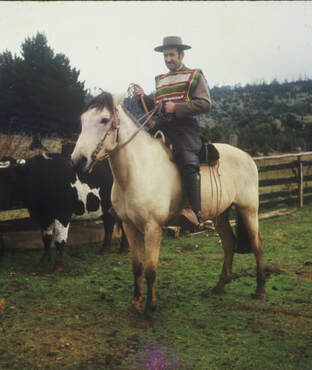 ​Tomás had seen Pablo dressed as a huaso--Chilean cowboy--several times.  He was a long-time member of the Huaso Club of Valdivia, and rode in parades and attended rodeos.  He wore a large flat-brimmed hat and a brightly colored little manta called a chamanto.The chamanto covered a snug, fancy jacket, and tooled leather leggings -- pierneras -- protected his pants.  His large jingling spurs were always highly polished. 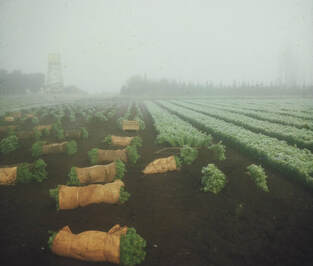 ​"My boss in the Ministry of Agriculture told me that the trees will come in burlap bags with five hundred in each.  I will separate the bags into piles for each socio.  You will have eight bags." 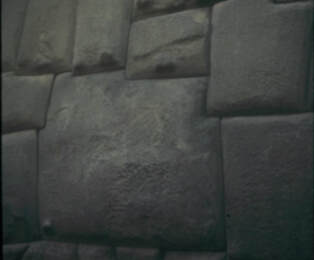 ​He saw a twelve-sided stone, set in an Incan wall, that put the stone walls of New England to shame.  Tomás tried to insert the blade of his pocketknife between each of the twelve joints.  He could not--the joinery was that tight and precise.